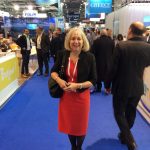 November began with a very busy weekend in London for Explore Oxford/Cotswold Exploring at the World Travel Market at London Excel.

This amazing event helps us to connect with existing and potential customers from all over the world. Now spread over three-days, WTM London (7th-9th November) is now into its 37th year, and the 2016 show turned out to be the biggest yet staged in the UK. Over 51,000 visitors streamed through the doors to explore stands representing travel destinations from all around the globe. There were also plenty of opportunities for networking, negotiating and planning.

London’s WTM is probably the most important travel industry gathering anywhere in the world, and has become a must-see opportunity for anyone involved in travel and tourism. The figures are staggering, especially when one considers that deals valued at some £2.5 billion are settled during the period of the show. We can’t compete at that level quite yet, but we’re working at it!

These photographs show just some of the stands we enjoyed seeing, including UK and Ireland of course!