David and Isobel Lewis, founders and operators of Cotswold Exploring, have been featured in the Oxford Times. The article, which is reproduced in full below, majors on the recent acquisition of a brand new Mercedes Sprinter minibus, which is the focus for their new business offering guided tours of the Cotswolds.

A former pilot has swapped a helicopter for a minibus to start a new business venture. 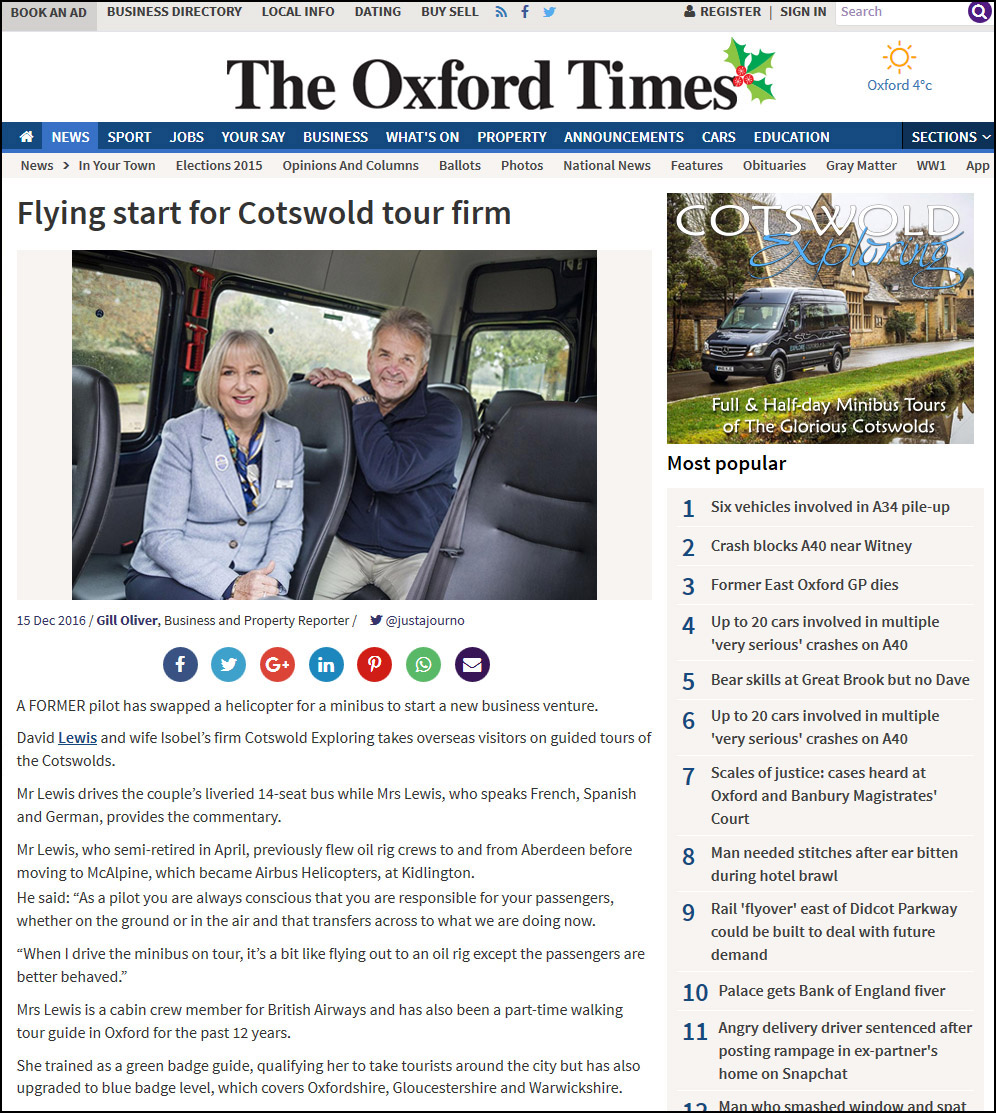 Mr Lewis, who semi-retired in April, previously flew oil rig crews to and from Aberdeen before moving to McAlpine, which became Airbus Helicopters, at Kidlington.

He said: “As a pilot you are always conscious that you are responsible for your passengers, whether on the ground or in the air and that transfers across to what we are doing now.

“When I drive the minibus on tour, it’s a bit like flying out to an oil rig except the passengers are better behaved.”

Mrs Lewis is a cabin crew member for British Airways and has also been a part-time walking tour guide in Oxford for the past 12 years.

She trained as a green badge guide, qualifying her to take tourists around the city but has also upgraded to blue badge level, which covers Oxfordshire, Gloucestershire and Warwickshire.

She said: “I have a part-time contract with BA which means I work three weeks on and then have six weeks off.

“I get my roster at the beginning of the previous month, so can run the business alongside the flying.”

The couple, who live in Steeple Aston, came up with the idea after Mrs Lewis saw how many French and Spanish tour groups were coming to Oxford.

She added: “I kept being asked if I would take French or Spanish-speaking groups into the Cotswolds, so worked out there was a market for this.”

The pair have run more than 20 tours since starting in June and at the height of summer were doing four a week, attracting Japanese and American, as well as European visitors.

Tours are a full or half day, with prices from £65 per person and include stops such as Bibury, Bourton on the Water, Kelmscott, Chipping Campden, Broadway and Stratford-upon-Avon.

One of their first moves was to invest in a £50,000 Mercedes Benz mini-bus from Oxford dealer Rygor.

Mr Lewis, who had to gain the right qualification to drive it, explained: “I could drive a minibus on my existing licence but because of the type of use and from a safety and insurance point of view, I had to jump through a number of hoops.

“We are talking thousands, rather than hundreds, of pounds to obtain the correct licence and various other qualifications for both of us but we wanted to make sure everything was done the right way.”

View the article on-line here, at The Oxford Times