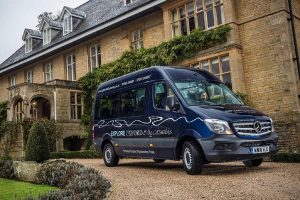 Isobel and David Lewis, the people behind Cotswold Exploring, are delighted to have been selected by Mercedes-Benz and the Oxford branch of Dealer Group Rygor to spearhead a new marketing campaign for the new Mercedes-Benz Sprinter.

Cotswold Exploring is the first company in the UK to deploy the Sprinter, in the minibus format, for touring and sightseeing. The smartly-liveried 14-seat 316 CDI Tourer has already been turning heads as it travels through the picturesque villages and lanes of the Cotswolds. In late November, Rygor issued a press release, with accompanying photos and video, highlighting the way that the Sprinter has met all the expectations (and exceeded many) for the husband-and-wife team as they embark on their new business venture.

“With former helicopter pilot David at the wheel, and qualified tour guide Isobel providing the informative and engaging commentary, they offer a choice of itineraries that introduce visitors to a much-loved designated Area of Outstanding Natural Beauty which has inspired artists, writers and philosophers for centuries,” states the release. “One American guest, keen to see The Cotswolds, admitted on TripAdvisor: “I am not big on guided tours but … I wasn’t comfortable driving on the wrong side of the road, so I decided to give this a try. It was a spotless Mercedes van … its high windows allowed for good viewing as we travelled. Thank you for such a wonderful day!” 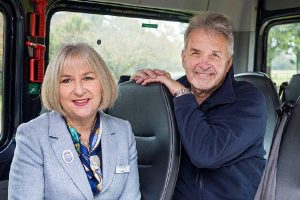 “You will be totally at ease with David at the wheel,” observed another TripAdvisor contributor. “Their vehicle, a custom Mercedes touring van, provides the ultimate in luxury comfort and superb visibility. They went the extra mile in so many ways in this perfectly sized vehicle to allow exploration of charming venues that motor coaches cannot access.”

“Their new Mercedes was a hit!” declared another, while a Canadian couple also had no hesitation in recommending Cotswold Exploring: “The tour guide and driver were very knowledgeable, courteous and helpful,” they reported. “The minibus was new and comfortable.”

Isobel, who speaks French and Spanish, began conducting walking tours of Oxford on a part-time basis some 12 years ago, while also working as British Airways cabin crew. Mr Lewis, meanwhile, has spent his entire career in aviation. “Having decided the time was now right to start the new business I needed to obtain a PCV licence and find a vehicle. I visited several suppliers but the response from Rygor was the most professional. This was reassuring as Mercedes-Benz was my preferred brand from the outset, not least because it offers a minibus that comes straight off its own production line, which meant I didn’t have to deal with a third-party converter,” said David. “The requirement was for a minibus that offers high levels of comfort and safety, as well as good visibility – I was very taken with the stylish lines of the mid-sized Mercedes-Benz Vito but finally chose the Sprinter for its bigger size and greater practicality.” 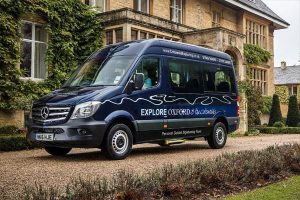 Cotswold Exploring’s Sprinter is powered by a smooth and responsive four-cylinder engine that transmits its 163 hp output via an optional, seven-speed 7G-TRONIC PLUS automatic gearbox. As a BlueEFFICIENCY model it also features a range of measures which contribute to an impressive 36.2 mpg (combined cycle) economy figure. “The Sprinter is a pleasure to drive while the exhaustive list of Mercedes-Benz safety features is very reassuring. We’re still just starting out but the response to the vehicle from some of our early clients has been hugely encouraging, and confirmed that we made a wise decision.”

Paul Naylor, Van Sales Executive at Rygor, Oxford, said: “Mr and Mrs Lewis are not typical customers but they are a delightful couple and we wish them the very best of luck with their new venture.”